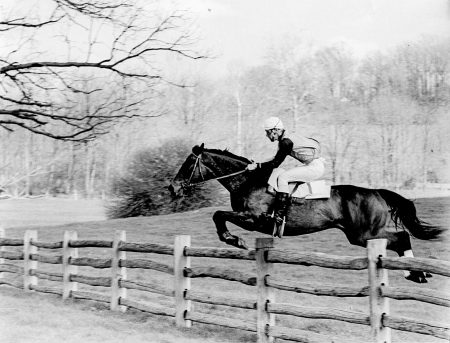 Many great equine names of the sport have graced the Grand National, but only a few have left their mark with the distinction of having won the race three times. They are: Inshore, Winton, Landing Party, Mountain Dew (pictured with Janon Fisher III aboard), Buck Jakes, Welter Weight and Senior Senator. With his fourth win in 2001, Welter Weight joined only one other legendary mount in winning the race more than three times. The other, a six-time winner and, still, reigning king of the Grand National, is Mountain Dew. Eight starts, six wins, two seconds and never a faller over 144 fences, he beat horses that had won or would win the Hunt Cup. He would make history in the next weekend’s race as well.

In 2022, The Grand National Steeplechase celebrates its 119th Running – a significant milestone for a thriving event. Grand National Day, the second-to-last Saturday in April, has been and will continue to be one of the most highly anticipated days of the year for all enthusiasts of timber racing and equine sport. The Grand National benefits the Valleys Planning Council, a 501(c)3 non-profit organization dedicated to land use planning, agricultural and historic preservation, and environmental advocacy. Visit the Valleys Planning Council to learn more.

Railside, Paddock, Subscriber, and General parking will be available for purchase online on a first come, first served basis beginning March 14, 2022. Parking passes will be mailed to paid patrons beginning March 28, 2022. Tickets sold after April 8th must be picked up in person at the Valleys Planning Council office located at 118 W. Pennsylvania Avenue, Towson, Maryland.

Find Us on Social Media